Not long into the start of the Schloss Itter project, (http://28mmvictorianwarfare.blogspot.com/)  Michael asked if it might be possible to recreate a Fiesler Storch for an aspect of the project which he had been considering.

By this point I was feeling quite enthused about the making of models as a positive distraction from the day job, and I set about the task with much excitement, after all it couldn't be that difficult - could it?

Having completed the usual Google searches, and watched several fascinating Youtube videos of the aircraft in action, I became certain that this was a project which I was keen to see through. These notes describe my process in recreating this interesting machine in miniature.

I began with a search of www.aerofred.com to find useful scale drawing to work from.

Upon finding a suitable drawing, this was scaled and traced in the CAD software to develop the basic profiles required for the miniature Storch, allowing for the 2mm MDF which I planned to use for the build. 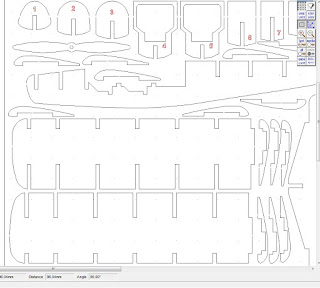 The individual part profiles were then exported into Solidworks, extruded to a thickness of 2mm and then assembled as though they were the kit components. 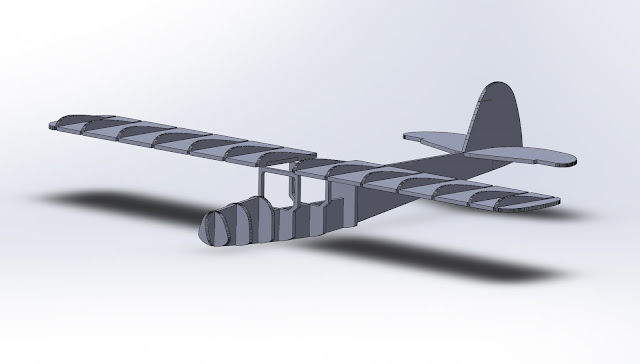 Satisfied that the fit of the parts was OK, they were collated into a single 'fret' of parts for
laser cutting. 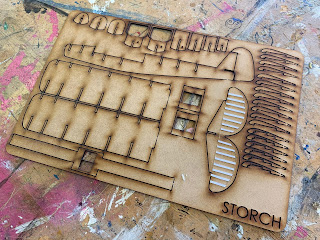 The parts assembled as expected and from here the progression of the model was rapid. 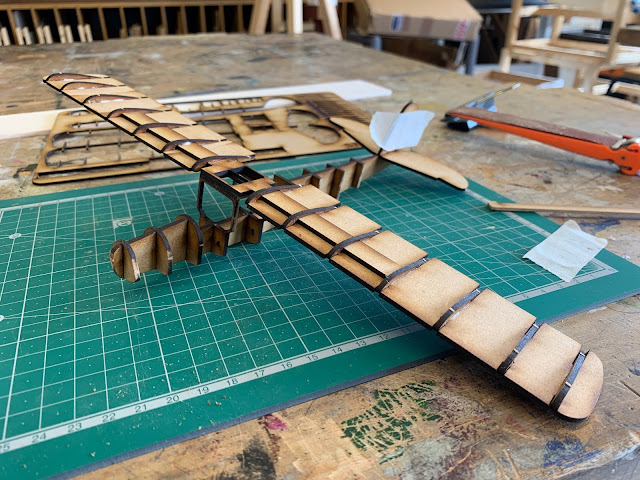 Having drawn the model on a Thursday evening, I now had something which resembled an aircraft by tea break on the following Friday!
Over the course of the weekend, the MDF wings were built-up with pieces of balsa, and sanded to the correct profile.  Here I found the burned edges of the MDF ribs to be a great benefit, as when the charring started to sand away I could be confident that I had reached the correct profile. 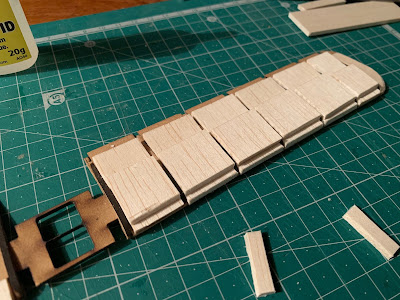 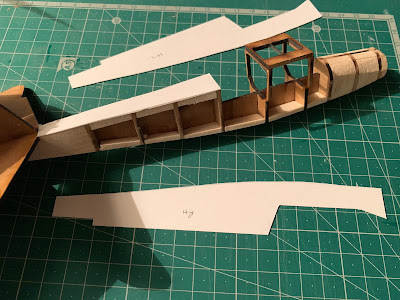 Thin card stuck to the assembly provided the 'bodywork'.  It was a little tricky forming the bonnet panel, and the outcome wasn't as good as I'd hoped for, however for a prototype it is passable. 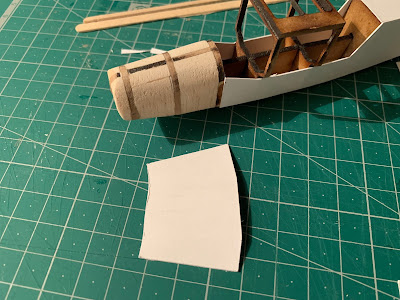 Returning to work on the Monday, I experimented with covering the wings with wet-strength tissue paper and dope.  This was the first time I had tried this technique, and I was delighted with the results. It was quick drying too which always pleases me.
The additional framework around the cabin was formed with cocktail sticks.  Thin card hinted at ribs to the tail fins. 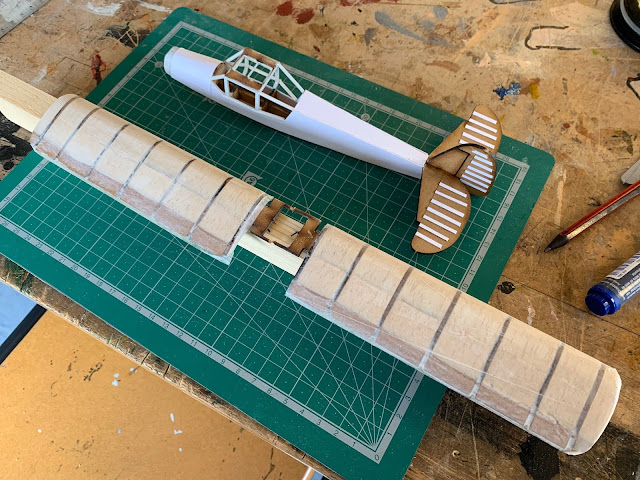 I should point out, that at this stage the model was being built as a prototype, Michael would later be 'crashing' the final model, however I gave the wing a quick coat of primer just to see how it was looking, and the results were very encouraging. As is unfortunately  often the case, having reached something of a milestone I subsequently became distracted and eager for something to fly to amuse the children at school who were taking a keen interest in the project as it unfolded.
So as a quick diversion, and a little bit of fun a P38 lightning was hastily knocked up and chucked repeatedly out of the window.
After about 10 flights and 9 crashes, and with the aid of much superglue, the flight characteristics were refined and an excellent glider was the result.
Sadly not to 1:56, but I guess could be resized.  A future project maybe? 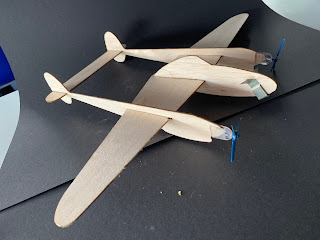 Returning to the Storch, a simple undercarriage was soldered up from 1mm MIG welding wire and a couple of wheels added.
I continued with the paint job by dusting a coat of grey primer acquired from Poundland.  Not quite up to the standards of Mr Awdry, but quite passable from a few yards away without my spectacles on!! 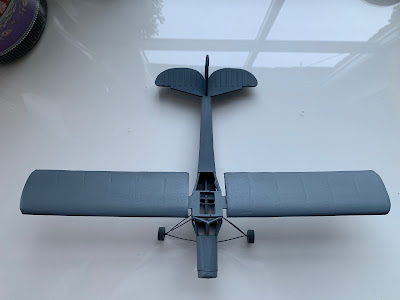 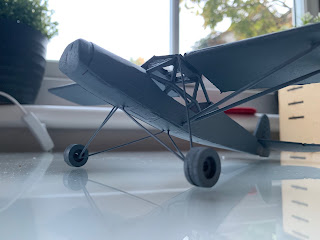 By this point I was feeling braver than perhaps I ought to have, and purchased a set of Valejo Luftwaffe colours. It was fun to give the aeroplane some colour albeit not a skill which comes naturally.  Making models such as this is new to me, and painting still a black art, so for this prototype the colour scheme is rather conservative and I haven't added any decals.  That said, I'm really pleased with the outcome..... 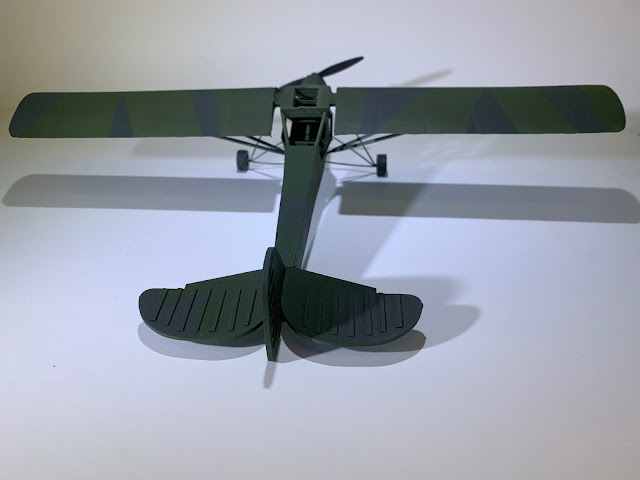 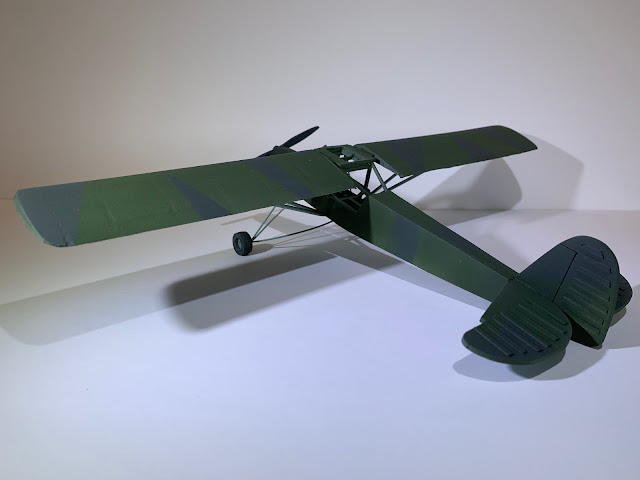 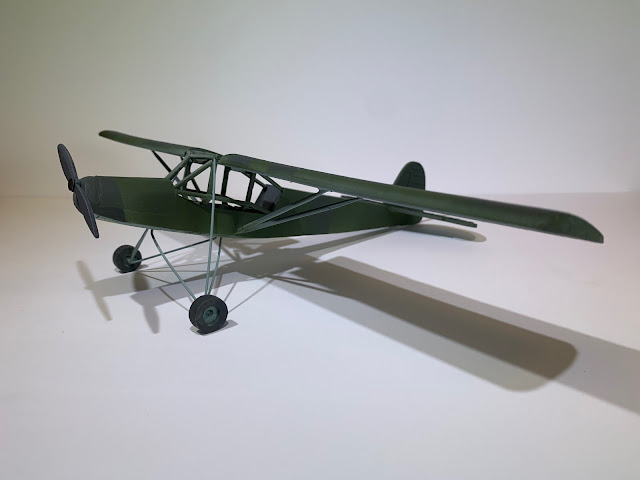 ......and pleased with the outcome I remained for several days until I started building the Hurricane.

As regular readers of 28mmvictorianwarfare will already know it became apparent that I'd made a mistake with the scaling of the aircraft.
What should have been 1:56 was in fact 1:43.  Hmmm....
Anyone for a O gauge Storch?

So it was back to the drawing board for a Mk2.  The scale of my 'error' can be enjoyed in the photo below.  The revised version is now perfectly scaled at 1:56 and  features seats for the pilot and crew as added detail. 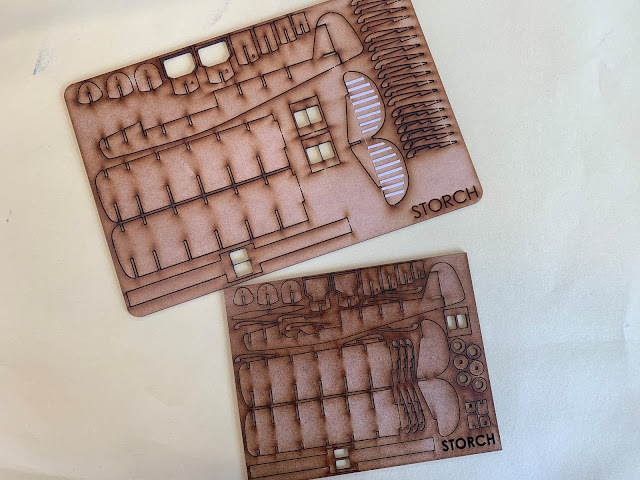 And that is the tale of the Storch project thus far, in some ways a failure, but lots of fun all the same.  As with many things in life, the lessons learned have already led to another idea.  Hence, the Hurricane, oh, and there may bit a Spitfire in the wings somewhere too.  But don't let on to Michael, as we're supposed to be building a castle.  :D

Construction of the Mk2 Storch has already started, and I hope with Mr Awdry's patient guidance to take my painting skills up a notch.
If there's any interest I'll feature it on these pages soon. 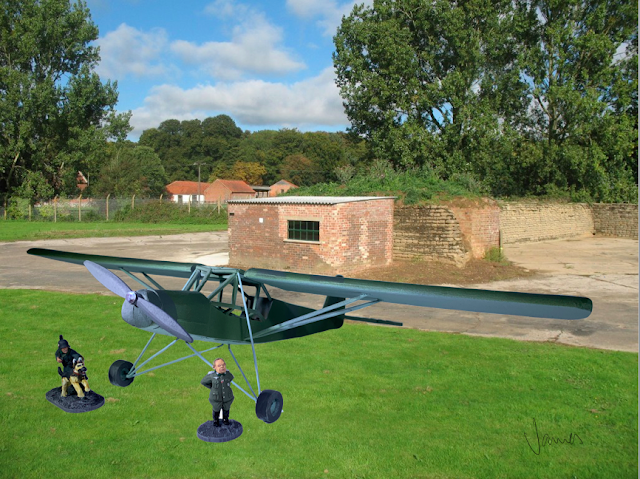