The past few moths have flown past, and although workbench output has been high, content to these pages has been somewhat limited.
The weeks leading from the October school holiday through to Christmas were consumed almost entirely with progressing the baseboards for the Itter project.  As some will know, I changed jobs at Christmas and so January has been really busy on the work front settling into my new position and getting things up and running.
I'm pleased to report that whilst challenging, my new role is proving to be very rewarding, and now that the routine of working in a new school has become established I'm keen to update this humble blog with the progress I have been making across several fronts.

Firstly, an update on the Vickers Vernon, which sadly took a back seat pre-Christmas during the big push on the Castle project.  However, I have finished all the final design work, and am now in a position to cut the final wing and tail-feather parts. Hopefully we should see that situation remedied in the coming days so (fingers-crossed) the next post will show some physical progress.  I plan to make the drawings/CAD files available to whoever might find them useful and am currently investigating a suitable hosting space - but more of this in an upcoming post

In other news, whilst no longer working day-to-day with Michael, I have been popping in to see him on the occasional evening and the progress he is making with the Itter terrain is incredible.  I've just enjoyed his last post and can confirm all is in fact even more superb in the flesh, as it were.
During these visits we have discussed several scenic items which will help tell the story of the battle.
I include my works-in-progress below to give a flavor of what I've been up to.

The first item will be an Inn.  Michael was keen to give an illusion of the castle's proximity to the village of Itter, which although is very close to the Castle approach is sadly too far away to fit onto our boards.  Therefore, just one building will be modeled, atop the hill on the castle approach.
Not having space to recreate a full-size replica of the inn at Itter, I have opted for a more modest affair based upon a photo of an Austrian chalet found on the internet. 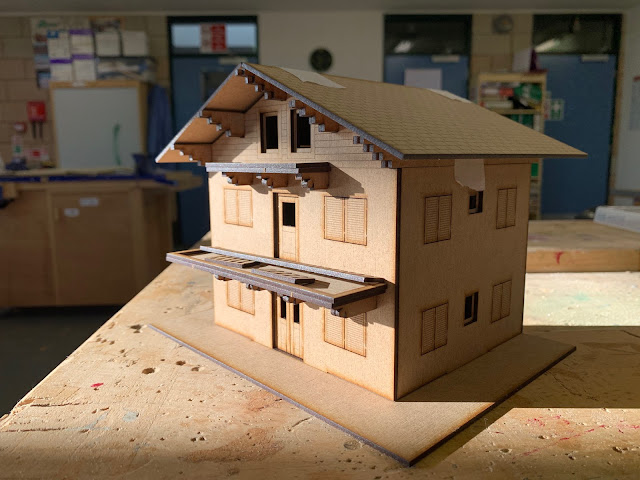 These pictures show the basic design, which when complete will have a full interior. 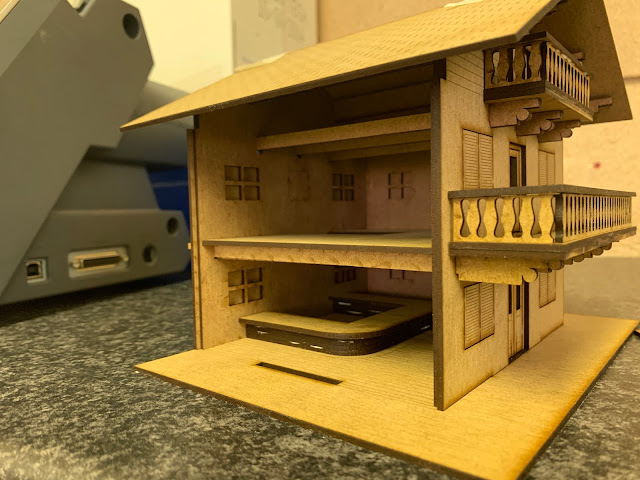 Here is the hastily painted prototype, still not finished, but giving a good representation of what the final outcome might look like.  Michael has lots of plans for this structureand I can't wait to see it finally in place on the castle boards. 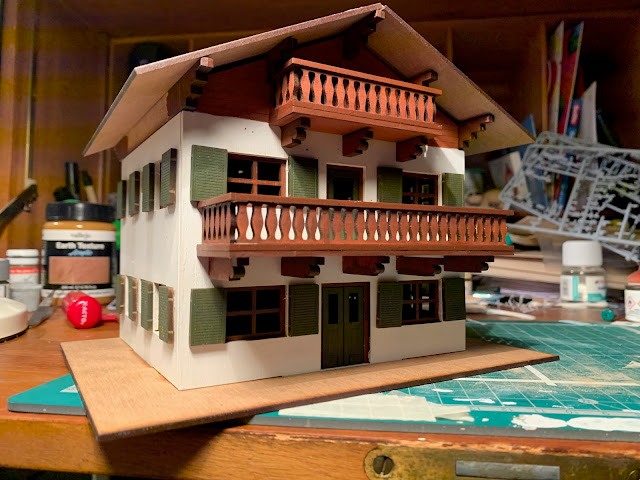 Next up, Michael was keen to include a mini saw mill within the tabletop, as an added feature which I'm sure will add an extra element to the game play, if only as cover for the SS in their attempt to storm the castle.  Looking for inspiration I found this image of Birkkarhütte on the internet.

Thinking it might make a useful woodsman's hut, I set about recreating a smaller version complete with some suitable paraphernalia. Although sadly not the kiddies bicycle!

I'm on the look-out for a suitable stationary engine to power the saw bench - which may end-up being a project in itself. 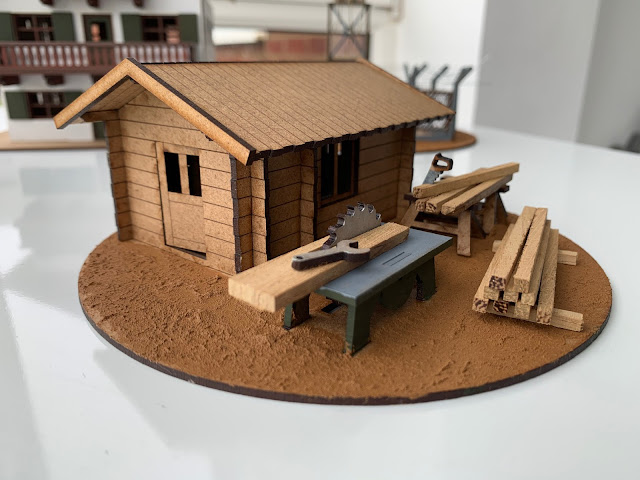 And so to my final piece for today's post.
Within the woods which surrounded Schloss Itter there was an electrical transformer or substation, the exact details of which are unknown to us.  We do know however that there was a machine gun nest nearby, possibly within it and Michael was keen that we recreate this element.
Not knowing quite what such a thing might look like, but being mindful that it should be instantly recognisable for what it is, I have come up with this.  Hopefully some insulators, paint and suitable 'Achtung!' flashes will help with the illusion.
Yes it's probably a little industrial for the location and period, but when complete I am sure will be weathered down and blended in with Michael's usual skill. 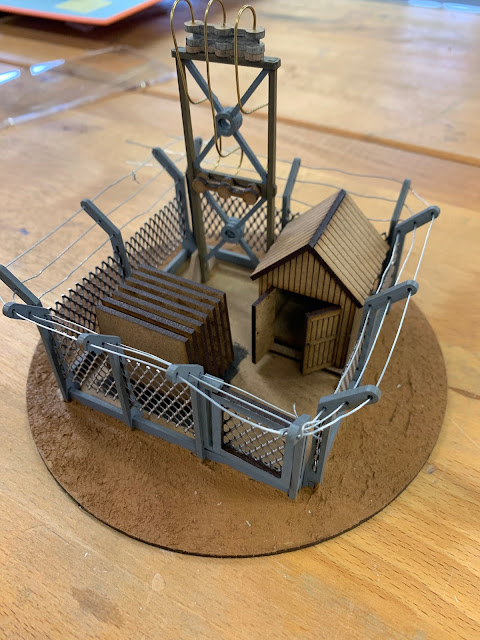 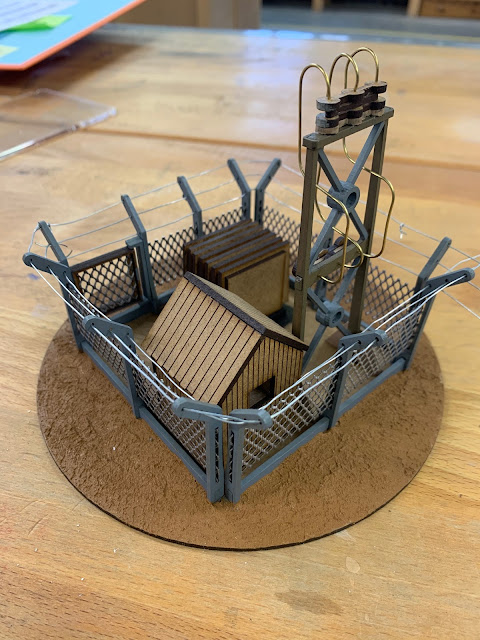 And here is a collective shot of my output for this last week.  The side wall of the inn looks at though it's about to fall over!  At this stage the building hasn't been glued together and is all just balancing.
There's still much to do, but hopefully these works-in-progress whet the appetite just a little.
I'll show some more progress, and hopefully a picture or two of these pieces in position just as soon as I get the chance and maybe delve a little deeper into the details of each piece. 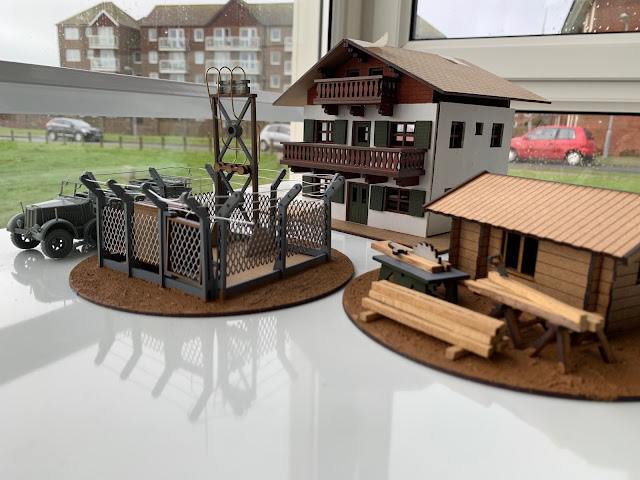 I'd written this post earlier today, and have now just returned from visiting Michael, and have had the chance of some in-situ photography.  So here's a little treat of one of the installations... 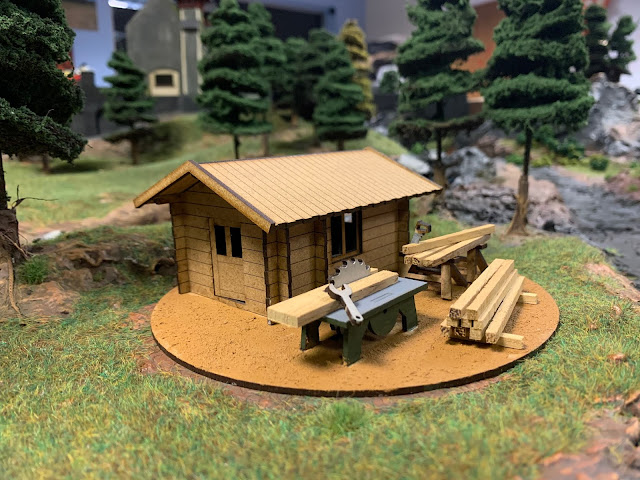